Evaporative systems are among the most in-demand forms of cooling in today’s generation. However, did you know that this concept of cooling dates back to ancient times? That’s right –  it was a way for the old people to stay cool despite not having air conditioners back then. This concept has seen various improvements throughout the years leading to today. Now, we have access to multiple systems such as an evaporative air conditioner water pump. In this article, you’re going to learn how to use it:

What Is Evaporative Cooling?

We want to assume that everyone has experienced swimming in a pool before. Now, remember the chill after swimming on a hot day. Do you recall the feeling when you got out of the pool, and the wind hitting your wet skin? Here’s an alternative one that you can try right now: try dipping your finger in a glass of water then blowing air across your it. Do you feel the cold sensation? That’s the concept of evaporative cooling. 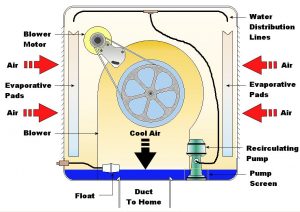 How Does It Work?

Evaporative cooling systems circulate water through saturated cooling while gathering air across the surface of the saturated media. The hot air then absorbs the moisture from the saturated media, reducing its temperature that’s discharged from the unit and ultimately producing a cool and refreshing burst of air.

The core of an evaporative cooling system is the media. Also known as the “pad,” it’s where the water evaporates and cools the air that passes through it. These evaporative pads are manufactured using two cellulose sheets that are glued together. They are them “chemically impregnated” with special compounds to prevent rotting and long-lasting service.

So overall, an evaporative air conditioner water pump is one of the most efficient and effective cooling systems that you can get today. Take advantage of all the benefits that it can offer by investing in one for your home today.